Feature racing continues at Gosford with the running of the third qualifying round for the Polytrack Provincial Championships on Saturday 16th March. The top three finishers from the $150,000 qualifier will go on to compete in the Championships Final at Randwick on Saturday 13th April.

An initiative of Racing NSW and the NSW Government, The Provincial Championships was launched to help promote Provincial Racing in NSW. The series gives provincially trained horses the opportunity to compete in the Championships Final and a share in $500,000. A qualifying round is held at each of the five Provincial Clubs with the top three placed horses going on to compete in the final at Randwick during the Autumn carnival.

The first qualifying round was held at Hawkesbury last weekend with Central Coast trainers dominating the podium. Wyong trainer Kim Waugh finished with stablemates SAFADO and SPRING CHARLIE placing one and two. Gosford trained IT’S SO OBVIOUS rounded out the first three qualifiers for the Greg McFarlane stable.

The Polytrack Provincial Championship is a great concept and it gives local owners and trainers a chance to mix it up on the big stage.” – Said Daniel Lacey.

Sure to be a busy day at the track, gates will open at 11.30am and will be free entry for all. The raceday features an eight-race card including the $150,000 Provincial Qualifier, over 20 food and dessert trucks, live music, free kids activities and a designated ‘Saturday Sessions’ area for the party goers, there will be something for everyone.

“Most people on the coast know that we hold the very popular Aussie Night Markets here on the first Friday of every month. During January we mixed the food trucks with racing and it was a huge success. So we are going to continue that mix and host the food trucks on a feature raceday. This time is will be more of a day time carnival/fete feel with a separate section with DJ’s for the younger crowd. During January over 2,300 people attended and weather permitting this will be no different, it will be a fantastic event for the Central Coast, hopefully for years to come.

There will be a number of Gosford trained hopeful’s trying their luck this year. Greg McFarlane already has secured a birth with ‘Its So Obvious’, he also has ‘Clear the Beach’ and ‘Golden Tycoon’ that will compete. Other Gosford trainers should include Grant Allard with ‘Americana Magic’ and Kylie Gavenlock with ‘The Big Vin’.” Said Lacey.

Hospitality packages are now available and selling out fast for the Saturday Raceday, to book visit theentertainmentgrounds.com.au or contact the office on 02 4325 0461. 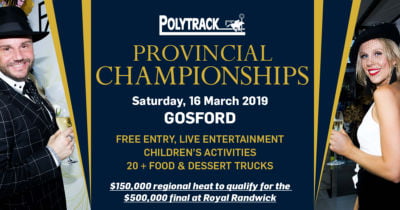