It is with a heavy heart, and great sadness, that we bring you the news that local Gosford trainer Fred Cowell passed away over the weekend.

For over 30 years, Cowell was a racing industry staple in the area, and is fondly remembered for being a friendly face at the races, a talented trainer, an amazing mentor to young jockeys, and an even better family man.

Having experienced recent group success with his top-line galloper Mighty Lucky, Cowell was known as the ‘quintessential bush battler’ and always had a handy one in the stable despite only ever having a handful in work at one time.

Mighty Lucky is a winner of over $850,000 in earnings and nine races including the Group 3 Summer Cup at Randwick and the Listed Luskin Star Stakes at Scone, where he had to survive a protest from Hausmann, a runner from the juggernaut Darley operation. Cowell famously said during the protest, “If they run the race again, Mighty Lucky wins.” The protest was dismissed in three minutes, in what was dubbed a David versus Goliath battle.

Whoever crossed Cowell’s path only ever had kind words to say about him, a testament to the type of man he was on and off the track.

Local trainer Ken Parker has many fond memories of his ‘old mate’ Cowell, developed over his many years at the Gosford racecourse.

“Fred was a very well liked man, who would call a spade a spade and was always straight to the point,” Parker said. “He had his arguments with people, but don’t we all! He was the type of bloke you wouldn’t hold a grudge against. Just a lovely, well respected man that will be sorely missed.”

Katie Collins, who works on course with trainer Nick Mitchell, remembers Cowell as a familiar fixture around these parts and says she’d struggle to find anyone who didn’t like him.

“He was absolutely loved by everyone,” Collins said. “We’ll really miss his familiar face around these parts.”

We send our deepest condolences to Mrs Cowell, and all family and friends during this sad time. 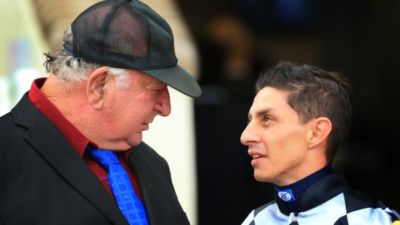